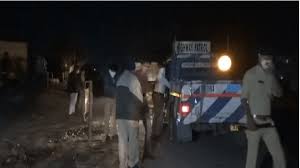 Surat: At least 15 migrant labourers sleeping by the roadside in Gujarat’s Surat district were killed on Tuesday after being crushed under a speeding truck.

According to available sources, the mishap took place near Kosamba village, around 60 km from Surat, police said, adding that all those killed hailed from Rajasthan.

The truck ran over them on the Kim-Mandvi road, police said. While 12 persons died on the spot, three of the eight injured died in a nearby hospital, police said.

The truck driver lost control of the vehicle and veered off the road, onto the footpath, running over 18 people who were sleeping there.