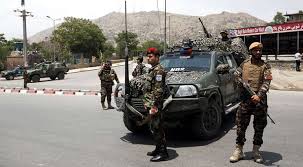 Kabul: One person was killed and another wounded as a series of rockets struck the Afghan capital on Saturday, Afghanistan interior ministry said.

This is the second such attack to rock Kabul in a month.

Kabul police said  most of the rockets struck the eastern part of the capital. Worthwhile to mention that on November 21, eight people were killed when 23 rockets hit Kabul. The attack was claimed by the Islamic State group.

Another Minor Goes Missing In Nayagarh